Treachery is a project that I have started on to make a video game/interactive experience. This project is inspired by the board game betrayal at house on the hill made by Avalon Hill. I am working on the project as part of a group and our we are using github to track and manage our work. Our project page has more information on the project. The object of this experience it to manage a large project as a group and to learn how to make and design 3D models. This experience will be over this August but the project will always need more work to be done in order to finish the full game.

The project is fully published to github and I have made posts on the Unity Forums sharing the project with any interested people. Other people can use anything from the project under the GPL v3 License. This is an open source license where other people can use the material for free with some caveats. You can read more about this on the project’s license page.

The game is far from complete but does support a basic version of the game. Below is a screenshot from the game being played. In the picture players are simply exploring the house. In the game, players explore the house, and after a certain point the ‘haunt’ will start and one player will become the traitor. This traitor will attempt to kill the other ‘heroes’ while the heroes need to complete an objective to stop the traitor. There is simply a basic implementation of this completed in the project. I really enjoyed learning more about all the tools I used to create this and hope they will remain useful in the future. 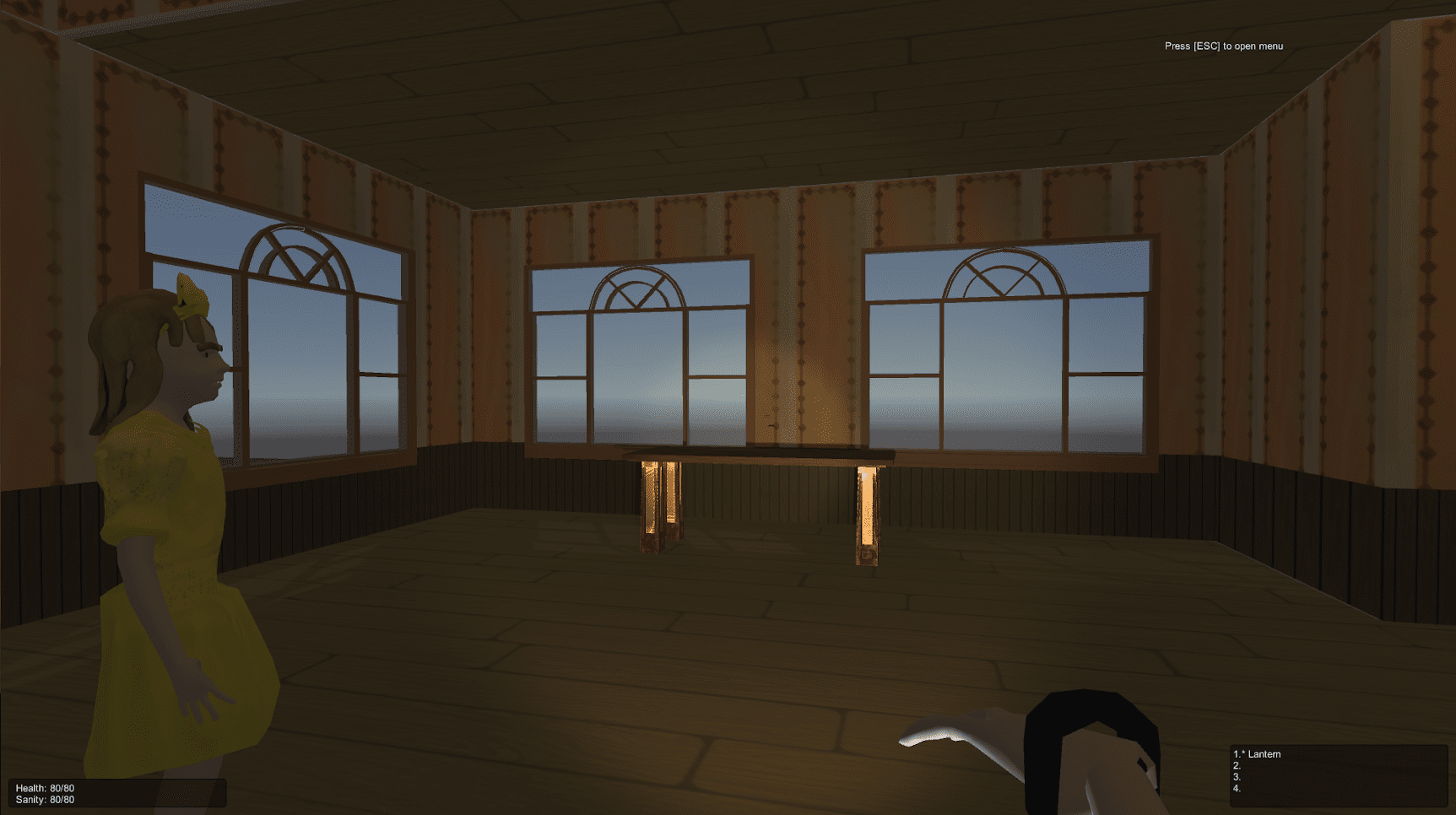 Picture of exploring the house with a ‘friend’. 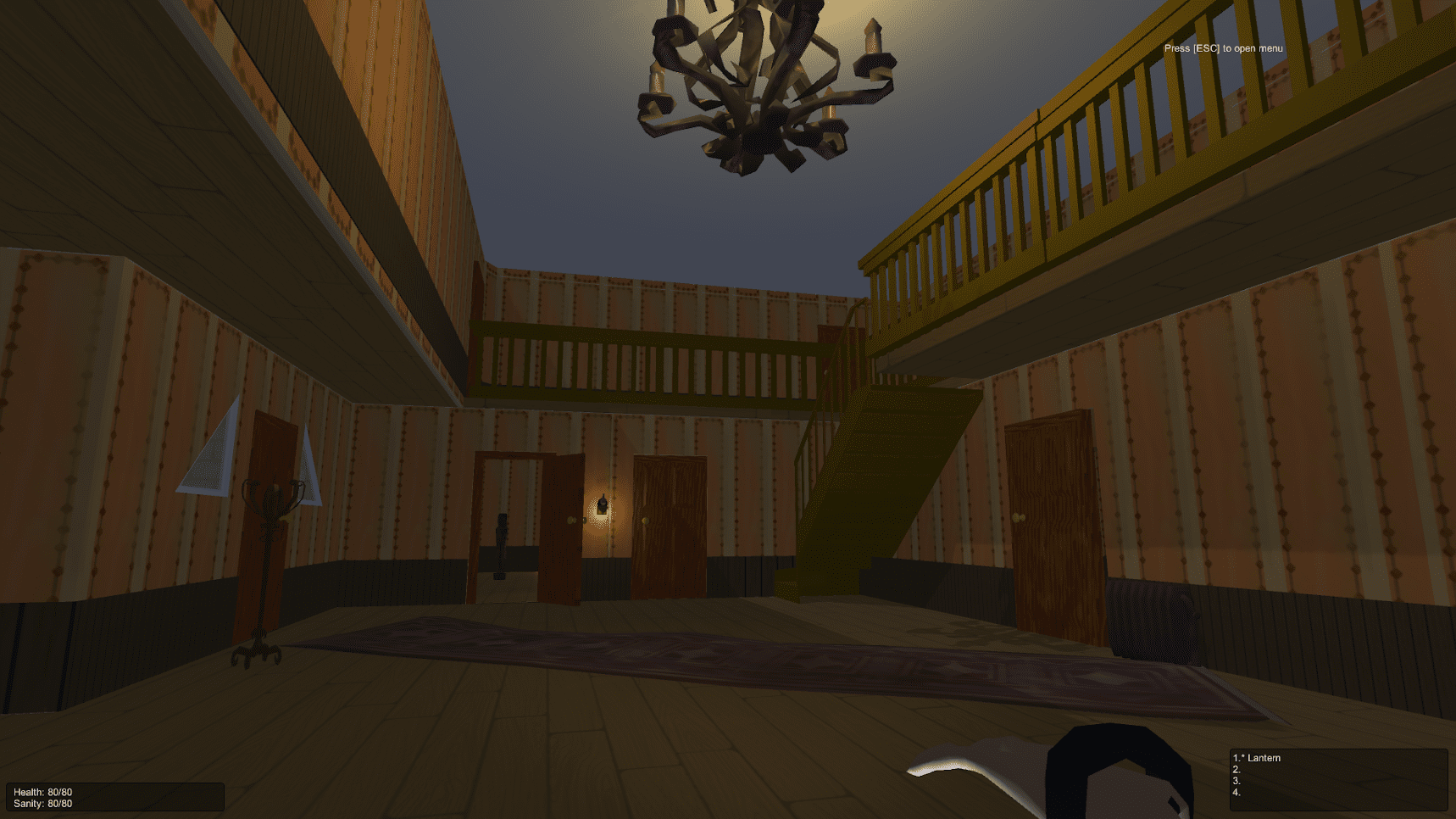 In the board game, there are 50 unique haunts that vary from one traitor, free for all, cooperative, and mixed. As of right now we have only implemented one proof of concept haunt, the Ring Haunt: it starts when a player picks up the ring (any number of haunts is supported).

The project had a vast scope and I really should have limited my original vision. My ambition and drive when working on the project were far beyond my actual ability. This passion helped push the project forward in the first month but as I ran out of time during the summer due to my job I faced major setbacks. In order to deal with this lack of energy, as a group, we started hosting the project on Github. This allowed us to remotely track our progress and sync our work as a group. The scope of the project was also decreased to just get an alpha version of the game working. These adaptations to challenge and adversity had somewhat crushed my original enthusiasm as the previous ideas no longer worked; I never enjoy admitting that I am wrong and need to change. Instead of spending my time designing and creating new applications I found myself more often than not debugging, writing reports and slowly progressing to the next objective. Progress was consistent but not what I had initially expected.

Despite not getting as much completed as I would have liked to, I developed my skills using the different software in addition to my skills of working in a group. I had previously hardly heard of Blender but after months of effort I learned how to make and animate a humanoid character. The character is used in the current version of the game and is one of the aspects my friends like most about the project; the character is definitely not a perfect but I can proudly look at the results from this and think that i have learned something. Additionally, I wouldn’t have been able to make this character by myself. I had communicate and show progress reports to my friends. We worked together on the initial design and planning. I then took the results from this and made some initial attempts. At a later meeting I showed the results to the group, it was far from perfect but from these conversations I was able to continually improve the character. After about two months I had fully incorporated the character and it worked extremely well with the final project. In future group projects I hope to approach difficult challenges in this manner of using communication and conversations to improve the final project.

Over the summer, when majority of the work was completed on the project, I also had a job doing research at Children’s Hospital. This took away most of my free time and made it almost impossible to manage my time. I had to constantly make decisions about what to spend my time on. I defaulted to working at my job as this had more direct professional implications but still managed to report my progress to my group (even if it was very little) and continued to develop next steps and managed the current progress. One consistent point of difficult between me and my group was the level of dedication to the project. I have to accept that other people may not be as interested in the project and have to act toward them accordingly. I specifically remember giving different examples such as rendered images as opposed to gameplay segments when presenting progress to different group members. I also did this at my job when attempting to ask for help from different co-workers, like giving images and graphs to my boss when presenting progress and showing code snippets to my more tech savvy co workers. If I am able to be adaptive and willing to put in extra effort I will get better results when working in a group environment. This experience and my reflection will provide me with a greater perspective. In the future when I am working in any level of professional capacity I will better understand how to communicate and adapt myself to get the best results from working as a group.