In fall of last year, I tore my meniscus doing everyday activities and needed to get surgery to repair the injury. The major difficulty I faced was that recovery would take 6 months and I would be on crutches for the next two months. Given this, I would have to get around UC and go to classes in the winter on crutches for the remaining two months of the semester. I also had to skip about the first week after surgery from school due to simply recovering from the operation. Although I did not want to have to go through this experience, the process of recovery gave me a greater perspective when looking into accessibility around UC. Throughout this experience I was able to both broaden my perspective and looked into possible methods to alleviate problems associated with accessibility on UC’s campus.

The first major difficulty beyond getting treatment was having to cancel other study trips. Originally I had planned to go on a study tour to China; although, with my injury, my doctor strongly recommended me not to go. After surgery and simply recovering I understood his recommendation. This is the whole reason that I decided to make this an honors experience— my injury forced me to look at how it would affect my future and change my perspective. Thankfully, I had recovered enough by January to continue my internship in California, even though for the first few weeks I was still using crutches. This depressing realization of having much greater difficulty when doing regular activities and having to cancel future plans also brought to mind the importance of community and support networks when faced with crises such as an injury. For my situation, I had family close and many friends with me but still had to face the challenge of continuing classes. One of the places which I was able to communicate with other people in similar situations was during my physical therapy sessions.

While at physical therapy, I was able to talk to my therapist and learn about previous people who he had treated before as well as talk to people from varying age ranges from other college students all the way to elderly people. Although the causes of injury and recovery times were different, everyone there faced similar challenges. The main factor was attempting to continue daily life with as little hindrance from the injury. When talking to another UC student, I discovered that she had dropped out after she injured her leg because she couldn’t get around UC. I understand why someone would do this after finding UC’s campus more than a little difficult to navigate when I had to get around on crutches. I found that the major difficulty I faced was that accessible paths were not always obvious or well labeled. This is no fault of UC’s campus because I understand the difficulty in creating and labeling paths and the cost this might cause for little or no benefit. Due to the cost, I would not recommend this undertaking because the improvements and benefits can be very difficult to judge. A support group among students to share information would be much more effective toward making the campus more accessible. I am not the person to start and run such an organization but would completely back the operations such a group if one forms on campus. It occured to me that when I am injured, it is difficult to find paths since that involves walking and looking around which is more difficult when you are in pain or very exhausted by simply walking around. Although, if you are not injured, you have no difficulty finding paths to get around. This realization means that to easily get around a location with an injury, one must first know all the paths of a location. This has caused me to look for these accessible paths wherever I go just by instinct for myself or other people in the future. I also realized the need for a tool that could improve this for new students at UC.

I had spent two years exploring campus so I knew my way around and could easily find routes around buildings, but for new students who may be injured will face serious difficulties in getting around. It occured to me that writing an app to help students find their way around campus would be extremely useful. I didn’t have enough time in three months with school and later an internship to develop a fully functioning app but I was able to learn much more about writing programs with Javascript for the web. I created a basic program to route through Baldwin Hall. Although without outside push I probably won’t finish the app. Simply the act of facing these difficulties has given me a much greater appreciation for the need of accessible pathways through public spaces and in the future I will always be conscious these limitations. Since I now have a first hand experience of the necessity for these pathways, I will report and do by best to improve the situation for anyone that may require them. Additionally, I am generally more cognizant of the needs of people who may require assistance or are recovering from injury since I had a similar experience. This is a very limited experience and only affects me as a person, I by myself cannot change the world, but hopefully my experiences and new outlook will help me to improve the situation for those around me.

The repo with progress on the project for UC path can be found here. 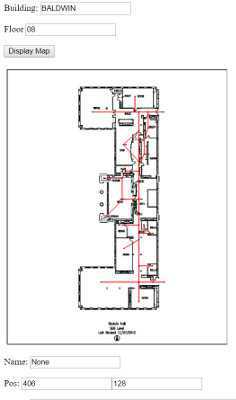